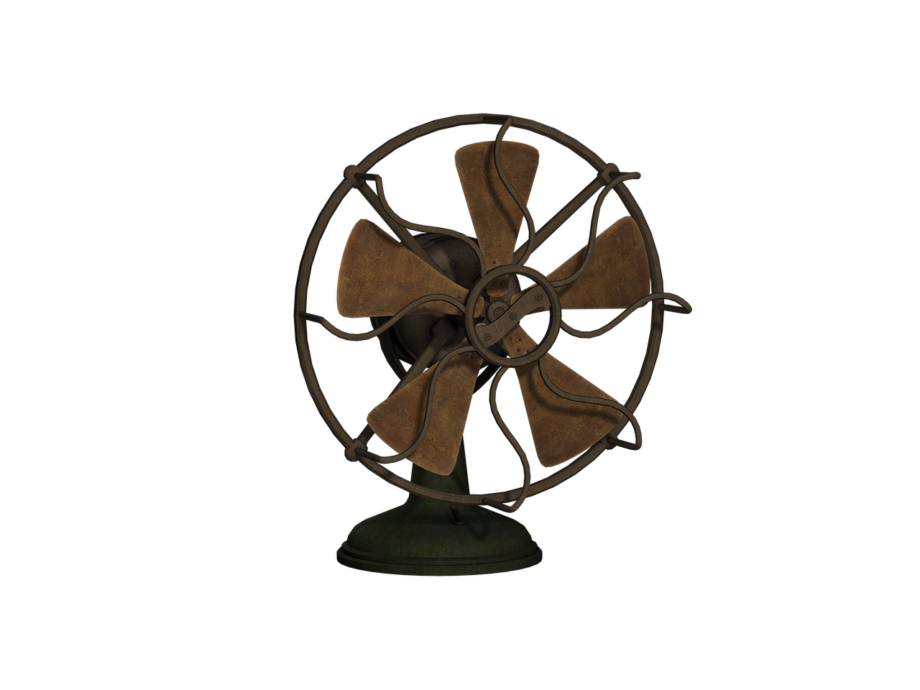 We all sit at desks from time to time. Maybe you’re at home working on some paperwork, schoolwork, or playing a game while eating some bacon. Maybe you’re in the office. Maybe you’ve paused your robbery and you’re leaning on a desk to see what website this person’s computer is on before you unplug it and throw it in your bag to steal.

Whatever the reason, desks are pretty popular. On most desks you’ll find an assortment of things: pens, monitors, keyboards, speakers, paper maybe (ew), and possibly… a desk fan. If you don’t know what a desk fan is, it’s a fan that goes on a desk. Pretty simple. I feel like you should have been able to figure that out on your own, but who am I to judge.

Regardless, I’ve noticed something funny about desk fans in my travels. When I used to work in retail, we’d have a fan in the back room on the receiving desk to keep the team members cool, and the blades spun clockwise. At home, I actually have two desk fans, both in the same room, to show that I’m more successful than you. Once again, both of these fans spin clockwise. I asked around, and found that this clockwise rotation is fairly standard.

Frustrated by the apparent lack of creativity in fan manufacturers, I decided to question the universe for a possible reason for this blight via the world wide web. This question has been asked before. Some users on Quora suggested that when a fan spins clockwise it pushes air and when it spins counter-clockwise it pulls air, all due to the orientation and angle of the fan blades.

The same answer was provided on Reddit, Hard Forum (which is about computer hardware, not… anything else, apparently. My apologies to the mods, I’ll ask my doctor instead.), and numerous home improvement websites discussing the proper use of ceiling fans.

However, there is a glaring flaw in this line of thought. If the rotation direction is dictated by the angle and orientation of the fan blades, why not just make them face another way? Why not reverse the force so that clockwise rotation pulls and counterclockwise pushes?

Desk fans always spin clockwise when blowing air, and frankly, I’m sick of it. Lazy engineering and unspoken standards are the blight of this society. There is never any doubt as to which way a fan will spin, or, if the fan can change direction, which direction will provide your ideal results. A fan, after all, is a very personal tool. Fans should present a question to every user who is not already familiar with the device.

Imagine, you leave a friend alone in your room and they find themselves feeling rather warm. They look to your ceiling, seeing your fan, and consider using it. They might just break your trust, and indeed, your heart, by daring to use your Hunter Cassius ‎59264 Matte Black Ceiling Fan, and nobody wants that.

Now imagine your friend in this same situation, but in a world with randomized fan rotation. Would they spend the time to learn the angle of these particular blades? Would they bother testing each direction to find the setting that pulls air upwards, creating a gentle breeze to cool their skin? If you recently beat them in Stick Fight: The Game, perhaps. But maybe, just maybe, the extra steps will lead them to hesitate long enough for you to return with the eleven freshly baked chocolate-chipless chocolate chip cookies you left to retrieve moments ago.

This is my call to action. To all you fan manufacturers and distributers, make a difference! Be the change you wish to see in the world and speak up. Add the chaos the fan business so desperately needs and save friendships all across the U.S., and indeed, the entire continent of North America, except for Canada. Desk fans always spin clockwise, and we need to fix that.